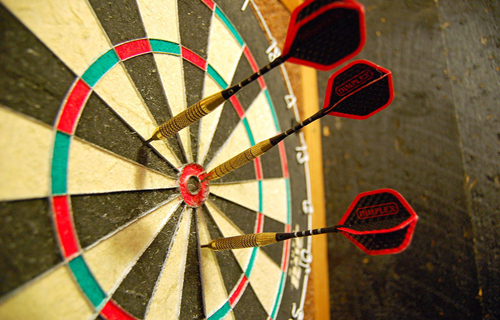 Language learning can be tedious at times, especially when grammar rears its ugly head.  However, lots of studies have shown that language learning through PLAY can significantly assist anyone of any ability to get a grasp on a language.  And even if you are not bound to mount your own amateur production of “Cats” or “The Phantom of the Opera,” fear not.  I do not mean that you have to engage in stagecraft.  Some hobbies are easier, and indeed more practical.  These two games can either be played solo or with friends.  Let’s look first at DARTS.

The game of Darts has been around in some shape or form for time immortal, but the ‘standardised’ version of the game has been in existence since 1896, when a pub owner / carpenter by the name of Brian Gamlin began to design a unique and challenging game.  Before modern darts, various adaptations of ‘blowdarts’ had been suggested, but it is reported that in France, at the tail of the 19th Century, some unfortunate competitor actually SUCKED rather than BLOWED, and the dart lodged in his throat and he choked to death.  Rules had to be modified since.

So, where does this fit into my English learning, you may ask?  And rightfully so.  Well, firstly, it will be necessary to actually purchase a board.  Most dartboards retail at around about €25.  Of course, they are quite heavy, and need to be mounted on a firm and stable wall, and in a safe place.  Then, the dimensions of both height and distance need to be established.  Once this is all successfully set up, you can begin.  If you are an absolute beginner, it is not necessary to engage in the highly competitive and difficult games of either 301 or 501, which involves hitting ‘doubles’ and ‘trebles.’  So, to start, it is ideal to simply throw at targeted numbers.

For example, you can set such targets as

And if you SUCCEED

And if NOT SUCCESSFUL

Not only will you become better at the game itself, you will be training your mind in various verbs and sentence structures.