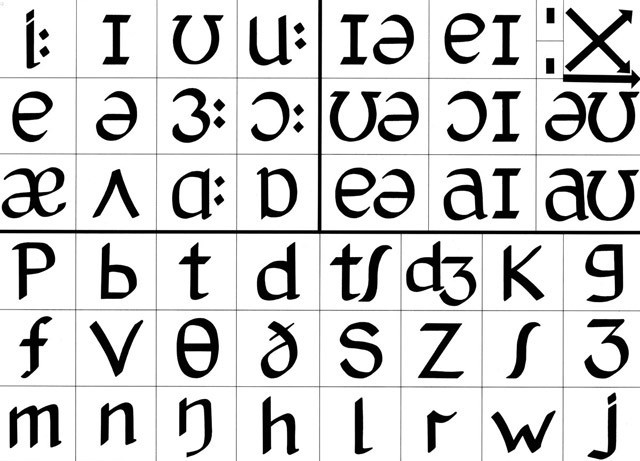 I have been an EFL/ESL teacher since 1995 and have always observed that pronunciation work is frequently set aside or even disregarded, in Adrian Underhill’s words:  ‘…pronunciation is the Cinderella of language teaching’.

As a learner, I remember very few teachers using the IPA chart in the classroom. It was a set of quite strange symbols that more or less resembled letters but they weren’t actually letters. It was kind of an alternative alphabet that didn’t make sense to me. My big question as a student was Why do these symbols exist? What for?

Many years later I became an English teacher myself and was lucky enough to have fantastic phonology tutors who clearly explained the reasons and origins of the IPA chart. There are several phonemic charts, I have been trained and taught Adrian Underhill’s chart (the most widespread).

As a teacher, I have always believed pronunciation work is basic given that the main aim of learning a language is to communicate effectively in the L2. However, curriculum constraints and time tables made it difficult to set pronunciation work in every class. Grammar and Vocabulary seemed to be far more important. What a big mistake!

My Trinity TESOL Diploma studies reaffirmed my convictions about the importance of phonology and provided me with tools to address pronunciation confidently and systematically.

Spanish learners have serious difficulties with vowel sounds, so I decided to examine this issue with my own learners: HOW CAN THE PHONEMIC ALPHABET AND UNDERHILL’S CHART HELP TO IMPROVE THE PRONUNCIATION OF VOWEL SOUNDS (MONOPHTONGS)?

I investigated how learners can improve their pronunciation, intelligibility and communication skills by becoming aware of individual phonemes and Underhill’s chart.

While exploring the idea of ‘learner training’ to foster students’ autonomy, I observed that the awareness of sounds and symbols clearly encourages independent learning; e.g., decoding the pronunciation of words in dictionaries.

I work at a little language academy in Ibiza, Spain. Most students are Young Learners, Spanish and Catalan speakers who attend class three hours per week.

I developed this project with two groups who were enthusiastic about pronunciation. My aim was to address their need for practical tools to understand and pronounce individual sounds effectively.

An area that particularly interests me is ‘The need for physicality’, which implies helping learners to locate the muscles needed to escape ‘the grip of their mother tongue phonetic set’ and find the internal ‘muscle buttons’ to press to get a different sound (A. Underhill, 2010).

The idea was to help my students locate the following “Muscle buttons”:

Physicality and proprioception, the inner consciousness of what the muscles are doing, are closely related. Too often, students get the impression that pronunciation is merely about sounding good (M. Hancock, 2017). My idea was to help my learners start building up an experienced internal proprioceptive map (A. Underhill, 2014) which will hopefully allow them to control their muscle buttons and find their own intelligible accent.

The lack of many similarities between the two phonological systems makes pronunciation a difficult area for Spanish learners. In English there are twelve monophthongal vowels; in Spanish there are five and in Catalan, eight. The wider range of sounds in Catalan could be an advantage for its speakers (M. Swan & B. Smith, 2001), but an area that proved problematic is the variable length of vowel sounds in English (not a distinctive feature for Spanish vowels). Miscommunication episodes, e.g., ‘My mum is /θ3ːrˈtiːn/ years-old’,  ‘My new t-shirt was /ˈtʃɪp/’, led me to decide to work in this area; as Jennifer Jenkins suggests in “Global English and the teaching of pronunciation”, teachers can be selective about the sounds they help learners to focus on.

According to Patricia Kuhl in “A new view of language acquisition”, the perceptual map of the first language constrains the acquisition of a second language; she mentions a critical period for language learning stating that after the age of seven, skills at acquiring a second language diminish. My learners’ youth constitutes an advantage for them because their articulators are not as fixed as adults’ articulators.

I was keen on exploring the view of Underhill’s phonemic chart as a mental map. Raising learners’ awareness of the chart’s meaningful layout, which actually tells us how and where the sounds are made, makes pronunciation concrete rather than ethereal or elusive (A. Underhill, 2010).

The main reasons why the use of the phonemic chart is useful and helpful in my context are:

Lexis and pronunciation are often acquired and retained better if learnt independently rather than fed by the teacher; therefore, my idea is to encourage independent pronunciation learning. Learners should be made aware of the importance of pronunciation and of which sounds help them to become more comprehensible in the English speaking world.  (N. Meldrum, 2004).

I devised a series of lessons to pursue my objectives, with the wider aims of improving my learners’ pronunciation and autonomy by teaching the phonemic symbols and chart.

This has helped learners start developing a proprioceptive map.

My advice for EFL/ESL Teachers: Do not be afraid of teaching pronunciation, learn the chart, learn about its meaningful layout, and become aware of your own “muscle buttons” so you can pass on that knowledge. Address pron work as a PE instance that will make pronunciation engaging and fun!

I have more than 25 years of teaching English experience. I am an English teacher, Teacher Trainer and Tutor. I specialise in Young Learners and teenagers but I also teach adults. I enjoy sharing experience ..